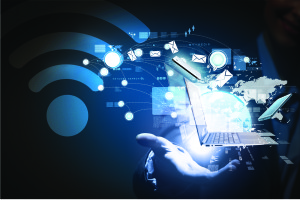 Wired or wireless? In today’s modern world filled with technology most would choose wireless, however, the key to optimum performance is in the architecture.

Throughout my experience, deep in the trenches, and or as a digital video surveillance architect, even though I’m considered a wireless video subject matter expert, I’ve come to the conclusion that wired is always better than wireless and that my expertise comes from my willingness and perseverance to make those ‘trouble spots’ actually work. It’s not about setting up a wireless link, configuring the radios and recording the signal and bandwidth statistics. If the wireless link only needs 4Mbps for streaming video, and the radio bandwidth statistics register 11Mbps throughput, then you’re done, correct? This is where most integrators go wrong.  If you’re using a 20Mhz channel OFDM, you should be getting maximum about 30Mbps – MIMO, you’d get upwards of 70Mbps, so 11Mbps indicates that there’s something wrong, and if left unchecked, it will degrade over time, with weather, interference and self-interference with additional installations. If you’re wondering where the ‘54Mbps’, ‘150Mbps’ and MIMO ‘300Mbps’ bandwidth numbers are, you’ll have to look at the product marketing materials, because this is about the real world.

Wireless networked video provides another option for data transmission, but cannot replace the basic need for power. No power. No camera. Wireless is a substitute under the following conditions;

1)  there is power at a desired location, but no cost-effective access to data

3)  there is a cluster of cameras that could benefit from wireless mesh networking redundancy.

Wireless can work and work well, but unlike an insulated and protected copper wire, or fiber cable, wireless is RF technology that can be affected by outside influences such as interference from other radios, microwave ovens and even the weather.

It’s important to keep in mind that digital technologies continuously encode and decode analog signals. If you’re using an analog camera, linked to a digital video encoder, that camera is sending an analog waveform through the coaxial cable to the digital video encoder. The encoder then encodes and sends the signal via an Ethernet cable (low voltage bursts) to the wireless radio, which then decodes it into another analog waveform that is shot out the antenna. Up until that point, you have a level of quality control, but once the digital signal is decoded and spit out the antenna as an analog waveform, all control is lost. In the vacuum of space, a microwave signal will go on forever, and although there are environmental and atmospheric factors that deteriorate, reflect and dwindle microwave waveforms, they do not stop at the outer circle in a conceptual design diagram. The only true element of control is architecturally. Architecting a wireless network infrastructure requires forward thinking beyond the point-to-point or point-to-multipoint links. There is limited bandwidth that is constantly changing in a fluid environment. Architecting for asynchronous applications fits better in that scenario, but synchronous security video, where every frame could be the crucial frame, it’s far more challenging.

Design to control the signal, using directional antennas, not 360 degree Omni-directional antennas, which will pick up interference from everywhere, reducing power, bandwidth and performance. I once registered another radio using an overlapping frequency over two miles away, in the opposite direction of the required uplink, in the thick of an urban city with a small Omni-directional antenna. Using higher powered antennas, you can use that same frequency on two hundred foot towers and shoot it seven to 11 miles away, so keep that in mind with wireless architecture, along with obvious obstructions, because different frequencies behave different with obstructions. An awning in the very centre of your Fresnel zone will make it near impossible to achieve any quality performance due to self-interference issues. The wireless signal becomes scrambled as the centre of the Fresnel zone should be 70 percent clear of any obstructions. When I bounced the microwave particles off the building across the street instead, I received a better signal and better performance. So, if you can bounce a 5Ghz particle off brick, you can bounce a microwave particle off another microwave particle and get self interference, multipath and or ‘noise.’ I once witnessed four high powered directional panel antennas installed inches apart from each other, all point in relatively the same direction. I explained to the Project Executive the technical issues with that type of installation. He didn’t understand, because he wasn’t technical. I explained that here you have four people shouting at the top of their lungs. One is speaking in French, one in Spanish, one in Chinese and the fourth in German. No one understands each other because they’re on different channel frequencies (languages), but they have problems hearing anything because of all the noise. Best practices dictate installing antennas at least one metre apart vertically.

A wireless mesh network is made up of two or more wireless radios that are working together to share routing protocols, to create an interconnected RF pathway. A wireless mesh network, no matter how many radios are included in it, creates only a single name identifier (SSID) and could also create a single IP address for the entire mesh, clearly distinguishing the mesh from another wireless or mesh network.

Wireless mesh networking includes three types of topologies, based on requirements, and line-of-sight (LOS). Those three solutions are;

While point-to-point and point-to-multipoint network topologies have been the standard for fixed wireless deployments, mesh networking has overcome some disadvantages in the traditional wireless topologies.

The primary benefit of a wireless mesh network (see Figure 1) is the extended bandwidth and redundancy. How this works is that the mesh radios become a RF extension of a wired network, providing a link in and out of an Ethernet network. The mesh radios are invisible to the end user, just another layer two switch, but without wires. The redundancy comes into play when the signal between two radios is interrupted, corrupted by interference, or the radio loses power and the mesh network ‘self heals’ by redirecting the traffic through another radio in the ‘mesh’.

All RF (current hardware and near future wireless gear) is and will be half duplex by the nature of the technology. A single radio using one channel can only communicate with one other radio, or client, in one direction at a time. Radio 1 can only transmit data so Radio 2 can receive it. When Radio 1 needs to receive data, it stops transmitting data and Radio 2 stops receiving data to switch. Radio 2 now transmits data and Radio 1 receives data. They cannot do both at the same time. This is relatively invisible for asynchronous applications, but what does this mean for synchronous security video streaming? Lost packets, lost frames, artifacting, latency, depending on the quality of the signal and the amount of interference in the area. A good sign of trouble is the latency or stop motion of streaming video, just before a PTZ command is initiated.

There’s more to wireless mesh networking for synchronous surveillance video than streaming User Datagram Protocol (UDP) packets. UDP is the preferred method of transport for streaming real-time video, especially over wireless. The packets are sent with no need for any acknowledgement that those packets made it through the network to the other side, because by the time you received the acknowledgement, the data is history (literally).

The commands that are sent to a Pan-Tilt-Zoom (PTZ) camera requires acknowledgement as those are sent Transmission Control Protocol (TCP). The software interface sends a command to the PTZ camera to pan; it requires an acknowledgement that the connection is made, and that it received the command. Ever wonder why a wireless PTZ camera suddenly starts panning moments after the command is sent, then won’t stop?

Keep in mind, the more camera nodes that are linked to a single network portal location (the node linked to the wired network), the more radios that a single radio needs to communicate with in half-duplex, receiving streaming video packets one at a time. Three single radio mesh nodes connected to a single radio portal, each with bandwidth tests of more than 20Mbps, yet, it’s next to impossible to achieve quality video from each camera. That single radio portal is taking turns receiving data from each radio, it literally stops receiving from the other two nodes and the outcome of those milliseconds of downtime is lost packets and frames.

Figure 2 depicts a real world example of how mesh networking intelligence can improve performance of streaming video quality and PTZ commands. The architectural design includes two radios at each mesh node location. Each mesh node location includes at least one camera streaming video in real-time using UDP transport method. These two radios also have two directional antennas creating a confined mesh network. The mesh portal Radio 1 constantly receives video streams. The mesh networking intelligence has chosen Radio 1 to receive data because it has the better signal and thus the better bandwidth. Cam01 Mesh Node Radio 2 transmits data to the Mesh Portal (or Master) Radio 1, again, because that link, on whatever channel, is clear of noise, interference and obstacles within the Fresnel Zone.  Cam02 Mesh Node and Cam03 Mesh Node understands that its destination is the Mesh Portal to get to the recording server through the fiber optic network. The mesh intelligence identifies Cam01 Mesh Node Radio 1 as receiving data on Radio 1. The mesh also recognizes that Cam01 Mesh Node Radio 2 is the pathway to the fiber optic network, with a robust link that can carry the additional data.

Cam03 Mesh Node Radio 2 also ‘sees’ Cam02 Mesh Node Radio 1 as a receiving path as a redundant link and chooses which of the two links can best transport the data, or depending on the equipment, it may split the data between the two paths.

Cam04 Mesh Node Radio 1 identifies Cam03 Radio 2 as a solid signal to also transmit data. However, Cam04 Mesh Node Radio 2 also has a link direction to the second radio at the Mesh Portal, so it can load balance its video signal in the event that the pathway through Cam03, Cam02 and Cam01 has deteriorated.

The real magic of the mesh intelligence is not only how it can handle network connectivity, or video load balancing, but also how it handles the PTZ control functions of each of the cameras. Remember that each radio is half-duplex, so it can only receive or transmit, it cannot do both. When the security operator in the command and control centre decides to pan and tilt Cam03, the mesh intelligence determines the best method of sending the signal through the portal. Should it send it through Cam01, Cam02, or just Cam04? The mesh intelligence has determined that the bandwidth allocated to Portal Radio 1 is heavily receiving multiple streams (from Cam01 to Cam03) and thus decides to stop receiving video data from Cam04 Radio 2 on Radio 2 only to send the TCP packets through Cam04 to Cam03 Radio 1. Cam03 Radio 2 continues to transmit video, while the Cam03 Radio 1 receives its PTZ commands.

Firetide and Fluidmesh are the two manufacturers that have had successful deployments all over the world, and are the only two I’ve personally seen these kind of results.  Although not all mesh networking intelligence are alike, these two can have improved video surveillance systems (once redesigned a system and replaced 170 radios with Firetide for dramatic results). The key is the architecture. You can have the best choice for the system, but if not designed to accommodate the requirements, they will act much like any other radio manufacturer’s product because RF is RF. When that analog microwave waveform is spit out of an antenna, they are all the same.

Anthony Caputo is a Director at Avrio RMS Group (www.avriormsgroup.com), which has the largest number of wireless security camera deployments for municipalities in North America with more than 100 cities. He is the author of the best selling Digital Video Surveillance and Security for Butterworth-Heinemann/Elsevier, with a new edition being released next Spring. You can contact him at www.tonycaputo.com