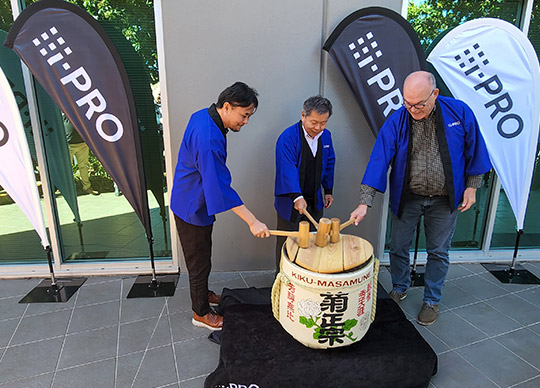 i-PRO APAC has held an official launch event in Brisbane. Aimed at kicking off the brand following the opening of i-PRO APAC as an entity in April, the event featured guests including Norio Hitsuishi-San, Vice President, Head of Global Security and Masami Eguchi-San, Executive Officer, Vice President, at i-PRO Co., Ltd.

The event was also attended by executives from Panasonic New Zealand, who remain as i-PRO’s distribution partner in New Zealand.

As well as defining the roadmap for i-PRO’s success in the region, new camera ranges and a comprehensive product line-up were revealed. These include the i-PRO Mini, the world’s smallest form-factor camera with in-built AI, as well as a wide range of PTZ, Domes and Fisheye cameras.

Marius Van Der Merwe said of the event: “It is gratifying to be at this point, with the company officially launching in the region and backed up by a such a significant range of new cameras. We aim to be at the very forefront of the technologies leading security into the next decade, and our ranges of AI-powered cameras are testament to that effort. The new structure of i-PRO also means that things will happen much faster now – we can respond better to market demands and shifts in our customers’ requirements.”

i-PRO is also in the process of expanding its local presence, announcing new hires to be announced over coming weeks.

“The organisation is putting more resources on the ground here, allowing us to fully commit to the region. Between our important partner alliances and an increased presence we are now in a great position to capitalise on the new technologies entering these shores and really lead the way for our customers,” continues Van Der Merwe.

Robert Meachem, Executive General Manager at BGW Technologies, said of the event: “We were honoured to be a part of the official opening of the APAC office in Brisbane. Our long-standing partnership with Panasonic and now i-Pro continues to be pivotal to our success because of the shared values and high quality of the products. What is already evident in the new i-Pro is the uplift in speed to bring new products and features to market and faster production times, yet still maintaining the highest quality. The future is bright as is evidenced by the significant uptake of the new i-Pro Ai technologies and when we couple this with the extra people and leadership of Marius Van Der Mere, we know the success will continue.”

The launch was capped off by a traditional Japanese ceremony, the ‘breaking of the sake barrel’ which signifies prosperity and good health. I-PRO’s regional headquarters for the ANZ market will be based in Brisbane, with representatives operating right across both Australia and New Zealand.