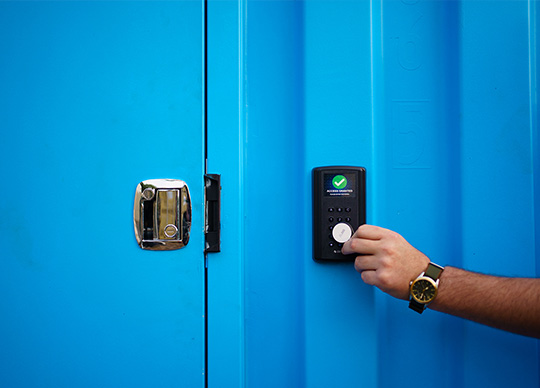 High Frequency has announced it has designed a “self-service” linen portal for a commercial laundry servicing the thriving short-stay accommodation market. Called the “Mobile Linen Hub”, this modified shipping container provides access to linen for users 24/7. After taking the linen they need, the cost is then added to their account as they exit the hub.

High Frequency’s initial prototype used a standard Wiegand 125 kHz reader to control access. Each customer’s card, upon scanning, granted entry to the Mobile Linen Hub while activating UHF readers inside. However, the prototype encountered several problems with its 125 kHz Wiegand readers. The readers’ lack of security allowed cards to be copied, and their lack of data storage prevented them from displaying why a card had been declined, for example. Customers only heard a ‘denial’ buzz and saw a red light.

Meanwhile there were multiple reasons a customer could be denied entry. Their card could be invalid, their account could be suspended from non-payment, or simply, someone else could be using the Mobile Linen Hub. Ultimately, the inflexibility of a 125 kHz reader led to confusion and a lot of support calls.

High Frequency solved the problem by switching to Idesco’s 8 CD 2.0 D Pin RFID display readers. “A highly secure MIFARE DESFire reader, 8 CD 2.0 D Pin instantly solved our card cloning issue, with zero impact on our own solution since Idesco handles both our card encoding and reader programming”, notes Isaac Hayes, High Frequency. “Our new system deployed a single Idesco reader on both sides of our Mobile Linen Hub, connected to an RS485/Ethernet converter, with our bespoke software communicating with them across OSDP”, Isaac continues.

This new display reader solution has greatly decreased support call frequency while increasing the product’s usability. Confusion surrounding denied access was also solved, with the reader displaying messages on its screen for users, such as “Access Granted”, “Access Denied, Account on Hold” and “Portal Busy, please wait before entering”.

While looking for a new solution for their system, High Frequency discovered that the OSDP standard made displayed private messages in an RFID reader possible. “During my research it became apparent that Idesco was the only reputable company with a colour display, OSDP-compatible reader”, Isaac Hayes recalls.

“Idesco 8 CD 2.0 D Pin reader is now an integral part of Mobile Linen Hub’s design, and will be included in all manufactured models for the foreseeable future”, Hayes reports.