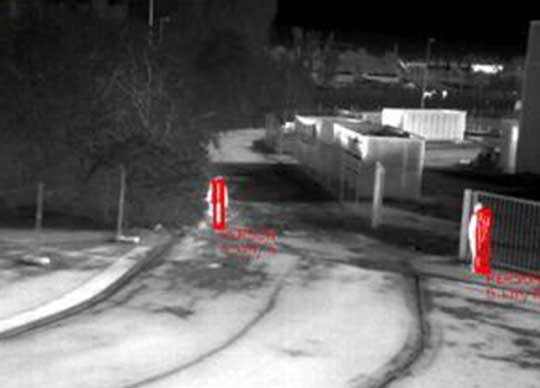 Running video analytics with analog-based surveillance systems created a paradigm shift in the security industry in the early 2000s. Initial pixel-based motion detection, which triggered alerts based on a percentage of pixels that changed on a screen within defined borders, were able to run motion detection algorithms using onboard hardware. This allowed systems to deliver detection alerts instantaneously and operate on the edge while avoiding any bandwidth or latency issues.

Figure 1: Examples of humans being detected and classified by video analytics

The first creates a reference frame by building the background based on previous images. The second compared the immediate frame to the backgrounded frame, concluding that any difference between the two must be motion. Within the third step, the pixels flagged to be in motion are filtered to remove non-relevant causes and processed to generate intrusion alarms. While these motion-based methods can be highly sensitive when detecting threats, they also tend to require significant calibration and configuration to minimize false alarms in real-world environments. Even when calibrated properly, some environments still generate false alarms with motion-based analytics. Noise motion—e.g., shaking trees, shaking camera, shadows, or reflections—cause most of these false alarms. Another issue involves objects that stand still for a time or appear stationary when moving along a camera’s axis at long range. These targets are subsequently absorbed into the background image and rendered undetectable. These limitations with motion-based analytics technology can be costly to security personnel and set the stage for the next generation of video analytics using neural networks.

Virtual Barrier video analytics are based on convolutional neural networks (CNN). This video analytic technique is designed to replicate neurobiological systems and can find and classify objects in an image.

Conventional systems rely on motion detection to identify where a potential object is.

Any moving target is processed by a set of filters, which determine whether the object is a threat. It is, however, impossible to account for every single situation in the real world— which means that some level of false alarms is always possible. The CNN video analytics used by Virtual Barrier addresses this by allowing the algorithm to automatically determine which features and filters are the most relevant to find and identify the desired object. Creating such a system starts with manually analysing tens of thousands of images to determine the location and classification of objects of interest. These images are then used to teach the neural network in an iterative process. Contrary to other CNN-driven systems, Virtual Barrier analytics don’t use images from publicly available datasets, which are frequently employed by other systems. Instead, it only uses Teledyne FLIR datasets, which are uniquely targeting the security application. This not only further reduces false alarms but also assures correct detection of all potential threats. 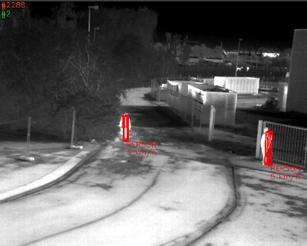 Backed by a library of thousands of images containing important augmentations and variations in the visual presentation of detectable objects, Virtual Barrier analytics are trained to classify objects in real-world situations where targets may be slightly obscured or challenging to identify. The FLIR FH-Series ID, for example, detected 15% more threats than motion-based analytics in a sample of 100 unique scenarios.

In fact, these analytics have been shown to reduce false alarms by 60% in a sample of 100 unique scenarios, which included noise related to extreme weather, animals wandering into frame, camera shaking, etc. This is a key advantage of Virtual Barrier analytics since false alarms are one of the costliest operational issues that security personnel experience today.

FLIR Virtual Barrier analytics support geo-location of targets in a scene. This means that each target’s position, speed and heading are identified by the analytics and streamed as metadata to be used by a video management software (VMS) or other downstream software. Geo-location data can be seamlessly visualized on a dynamic map as shown in Figure 4, to provide security operators with situational awareness of threats near their facility. The geo-location data provided by the analytics are also effective for positioning a PTZ camera for more in-depth assessment of a target.

DESIGNED FOR THE FUTURE

Designed for continuous evolution, Virtual Barrier analytics will continue to improve, able to address the intrusion needs of today and tomorrow for security personnel in critical infrastructure. Teledyne FLIR is committed to expanding libraries of images for ever-improving classification accuracy, as well as adding features to the analytics for field upgrades. Security directors can feel confident deploying cameras with embedded FLIR Virtual Barrier analytics as a solution for their current and future needs.