FUJIFILM has launched and already sold several of its SX800, a new long-range surveillance camera equipped with built-in lens, in Australia. The SX800, developed with the cutting-edge optical technology and image processing technology, features a high-performance built-in FUJINON zoom lens, capable of 40x optical zoom to offer a focal length range extending to 800mm, the world’s longest telephoto coverage in this type of camera*.”

Today, there is an increasing recognition of security for the safe and secure society. More recently, along with the changing international affairs, long-range surveillance cameras capable of monitoring distant subjects are being introduced not only at international border controls but also at large-scale public facilities such as ports and airports. However, conventional long-range surveillance cameras often have issues including their susceptibility to camera shake in gusty winds and slow autofocus. Fujifilm has been working on developing innovative products to resolve such issues by combining its unique optical technology, nurtured through the development of a wide range of lenses including 4K/8K-compatible broadcast lenses and cinema camera lenses, with cutting-edge image processing technology found in the “X Series” of digital cameras. 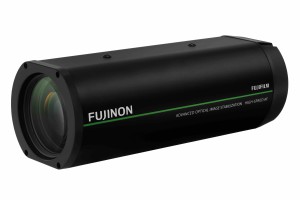 The SX800, the first to be launched in this initiative, is a long-range surveillance camera with 40x optical zoom to cover the focal length range from 20mm to 800mm. When combined with the digital zoom of up to 1.25x, the camera can reach the focal length equivalent to 1000mm in long-range surveillance. This means it can capture the vehicle registration plate** on a car at about 1km away. Fujifilm’s proprietary image stabilization mechanism accurately controls camera shake without any time lag.

Furthermore, the use of the Rear Focus mechanism*** and other features delivers high-speed and high-accuracy AF, attaining focus in as fast as 0.3 seconds.

(1) 40x optical zoom to cover a focal length range of up to 800mm, the world’s longest telephoto length

(3) Rear Focus mechanism for fast and accurate autofocus with AF speed as fast as 0.3 seconds