A FUJIFILM broadcast lens, its new two-axial rotatable lenses projector and its new security system have all won an iF DESIGN AWARD 2019 for Discipline Product presented by iF International Forum Design.

Created in 1953, the iF Design Award is recognised around the world as one of the most prestigious awards for innovative industrial product design excellence. Products are evaluated based on a wide range of criteria, including factors such as practicability, workmanship, consideration of environmental standards, degree of elaboration and innovation, functionality, usability, safety, aesthetics, and universal design. This year’s winners were selected from more than 6,375 entries from 52 countries by a 67-member jury comprised of experts from around the world. 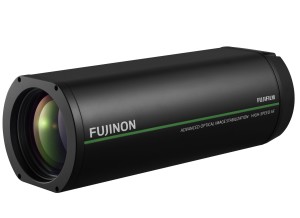 This is world best anti-vibration surveillance system, integrated with a camera featuring a long-throw lens. Major hindrances for outdoor surveillance include strong wind, high altitude, and heat haze. The SX800 can mitigate such hindrances and ensure visibility. Existing surveillance cameras are box shaped, but FUJIFILM minimised and redesigned the barrel shape. Thus, the installation becomes easier, and the design becomes more stylish. They applied black anodised aluminium extrusion on the body to show off its world-class profile, and covered the housing with resin. This improves the appearance and allows people to install it without touching the housing edge.

The second award winner was the FUJIFILM PROJECTOR Z5000. This is the world’s first projector with two-axial rotatable lenses. The lens can face up, down, to the front, rear, left and right to project images in multiple directions. It can project images without moving the main unit; on a wall, screen, the ceiling and floor. 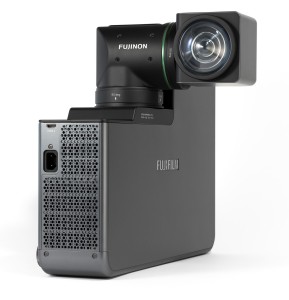 It also can switch between vertical and horizontal display. With the high-performance FUJINON ultra-short throw lens, it can project bright and clear images on a 100-inch screen from a distance of 75cm. Pursuing sophistication, FUJIFILM gave it design of rounded corners and a compact body. The projector is most suitable for large-screen digital signage and spatial design projection at museums.

FUJIFILM’s third award winner was the FUJINON UA46 Series lens. This portable super telephoto 4K broadcast lens boasts the world’s highest 46x zoom. Drone aerial shots are popular, but this meets the needs of professionals who like super telephoto shooting while remaining at the scene with realistic sensation. 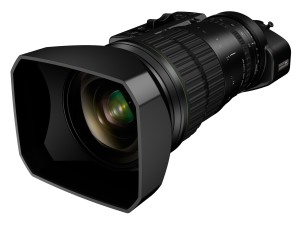 This 358mm-long small lens barrel realised such shootings at 570mm focal length and 2.8m M.O.D. The advanced large aperture ultra-high-precision aspherical lens controls maximally the resolution at image edges and the distortion due to the ultra-wide lens. High-resolution shooting works in all zoom ranges. It features high visibility of notation and better operability in scenes with vibrations.

For more on FUJIFILM optical devices go to: https://www.fujifilm.com.au/products/optical_devices

About FUJIFILM
FUJIFILM Australia Pty Ltd is one of over 280 worldwide subsidiaries owned by FUJIFILM Holdings Corporation which is the world’s largest photographic and imaging company, and one of the best-known and most instantly recognisable global brands.

FUJIFILM Holdings Corporation brings innovative solutions to a broad range of global industries by leveraging its depth of knowledge and fundamental technologies derived from photographic film. Its proprietary core technologies contribute to the fields of healthcare, graphic systems, highly functional materials, optical devices, digital imaging and document products. These products and services are based on its extensive portfolio of chemical, mechanical, optical, electronic and imaging technologies. For the year ended March 31, 2018, the company had global revenues of $23.0 billion, at an exchange rate of 106 yen to the dollar. Fujifilm is committed to responsible environmental stewardship and good corporate citizenship.