Three leading Australian universities are introducing SafeZone® technology from CriticalArc in a drive to improve safety, increase their security teams’ capabilities and provide better care for students and staff. 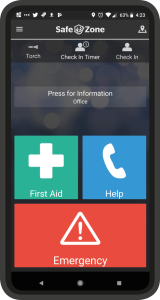 With 30% of Australian universities now using SafeZone, this latest wave of roll-outs confirms CriticalArc’s position as the most comprehensive safety and security management solution provider in the Australian market.

“UTAS, USQ and USC each have their own unique character and particular priorities but ensuring the best standards of care for students and staff is top of the list for all of them,” says Robert Christie, CriticalArc’s Customer Success Manager, Asia Pacific.

“Preventing crime, managing public safety and handling emergencies are still the top concerns of university security teams, yet SafeZone is also enabling those teams do much more to address issues that are increasingly important. From improving support around mental well-being to tackling sexual harassment and making campuses inclusive environments where everyone can feel safe and welcome, security and response teams are playing a much bigger role than they traditionally did. SafeZone is a key tool in enabling campus security to be more effective, more relevant and more approachable.”

SafeZone puts individuals directly in touch with response teams at universities, hospitals, government
departments and similar large organisations, making it easy for them to use their mobile phones to request help, trigger an emergency response, receive rapid notifications in the event of emergencies and benefit from a wide range of customer-care services.

The technology also lets students and staff share their situation with response team members by checking-in when working alone outside hours or in higher-risk environments such as laboratories and workshops.
With the ability to ‘geo-fence’ any location, each of the universities’ security teams can now monitor care and safety of users wherever they are – including those working out-of-hours on campus, those travelling between campuses locally or on field projects, or travelling overseas for study or research placements.
With its global reach combined with its ability to precisely locate vulnerable individuals, SafeZone is helping universities around the world to better meet their duty of care obligations, says Darren Chalmers-Stevens, CriticalArc, Managing Director.
“SafeZone offers all the functions that university teams want, in one easy package. It is not only helping them to deliver better care, it is letting them demonstrate this fact in an accountable way.”
About CriticalArc
CriticalArc is a global technology innovator and the creator of the distributed command and control solution, SafeZone ® , which has been adopted by dozens of universities and enterprises across the world to help ensure the fastest possible emergency and safety support for students and staff by providing easy, direct access to responders. SafeZone fundamentally changes the way businesses manage safety and security operations across multi-site organizations and dispersed campuses, allowing proactive response that positively impacts the outcome of any incident.
Headquartered in Sydney, Australia, CriticalArc has offices and operations in the UK and North America providing an international delivery capability and reach.
For more information on CriticalArc, please go to www.criticalarc.com, email contact@criticalarc.com or phone +61 1300 13 53 40.
For more information on SafeZone, please go to www.SafeZoneApp.com
Share. Twitter Facebook Google+ Pinterest LinkedIn Tumblr Email