Are you aware that you have a new compression in your pocket?

The latest iOS on your smart phone and iPad already embeds a new compression inside the camera functionality. If you take pictures and then view them on the smart device itself you may not notice anything unusual. However, when you export these images to your computer you may notice a new file format with an ‘HEIC’ extension, not ‘JPEG’ as before.

The HEIC extension refers to a compression known as High Efficiency Image File Format (HEIF).
This is a component of the new High Efficiency Video Compression (HEVC) standard, popularly
known in the CCTV industry as H.265.

The HEIC file format can be decoded by newer operating systems, beginning with Mac OSX High
Sierra (v.10.13), Mojave (v.10.14) and Windows 10 (v.1803 and later).
Since the new compression formats are very new some users may find it challenging to open and
edit such photos or videos with their default (older) photo-editing programs on their computers.

In the Mac OSX this can be done automatically by the native Preview app, while for Windows a
dedicated software needs to be installed. Such programs are iMazing or Apowersoft Photo
Viewer. It is also possible to switch the smart devices to use the “Most Compatible” format (under
the Settings => Camera => Formats) which will re-set the image format back to JPG.
Professional photo editing software, like Adobe Light-Room, have already come up with an HEIC
plug-in.

JPEG compression has existed since 1992, and as such JPG decoders are embedded in all
known software which needs to decode JPG images, such as web browsers, word processors,
and e-mail programs. Since HEIC is a very new compression, when sending the HEIC image file
as an e-mail attachment, the latest iOS operating system automatically converts it to JPG. This
function will eventually be made redundant once the HEIC becomes more common.

They HEIF increases the efficiency and quality of the compression algorithms. As the name
suggests, the ‘high efficiency’ coding means that for the same picture quality you would get from
JPG compression, the HEIC would be a much smaller file size.

Saving space with the HEIC file format is only one of the advantages, and reasons, for switching
to it. Another advantage of HEIC is its ability to compress a sequence of images (like a ‘burst
shot’ function when taking ‘live pictures’ with your iPhone.) You can also save auxiliary data, such
as the depth map used in Face Cam when unlocking your smart phone. Depth map is also useful
in image processing with dual camera smart phones, where digital blurring of the background is
performed by the software processing, simulating a narrow depth of field effect for more
appealing portraits.

Furthermore, the HEIF compression uses 16-bit colours, instead of 8-bit colours as used with
JPG. This makes colour images with gradual colour transition, like blue sky, appear smoother and
more natural; blocky artefacts – typical to JPG – become less obvious.
Admittedly, there is a price to pay for such an increase in efficiency in HEIC compression, and that
is more number crunching, and more coding and decoding processing. With modern and superfast
processors this is hardly noticeable, as processors now supersede their capacity on a daily
basis.

When comparing an HEIC with a JPEG compressed image the typical ratio file size ration is 1:2
for the same image quality. This means, a standard 12MP image from an iPhone, which (depending on the content) wouldmoccupy around 2~3MB in JPG. In contrast, the HEIC image with the same visual quality would occupy around 1~2MB.

Most people today use their smart phones for picture taking on a daily basis on all occasions,
privately and professionally, this requires a large amount of data space. This is the main reason
that many iPhone users always need extra space on their devices. With the update to the latest
operating system they can then take more pictures and videos, on the same device, consuming
much less space, yet offering the same image quality.

For illustration purposes, I have prepared some screen-shots of the ViDi Labs test chart,
compressed in JPG and HEIC format. The images are made with a ‘standard’ 12MP 1/3 sensor of
an iPhone7 using a ‘standard’ 4mm lens.

The equivalent JPG produced of the same test chart image was around 2.4MB. This is nearly 20x
smaller than the TIFF! It is not surprising that users prefer JPG compression rather than
uncompressed TIFF format, for very little loss in quality.

The equivalent HEIC format is literally half of this, 1.2MB, and it is almost impossible to notice any
loss of detail compared with the JPG.

The ViDi Labs test chart has many small details and after careful inspection I could not see any
difference, between the JPG and HEIC files, despite them being 2:1 in file size. There is a tiny bit
visible difference between the TIF file and the JPG and HEIC, where the TIF looks slightly sharper,
as it would be expected (being uncompressed). This is shown further in the pictures crops.

Offering such data saving, there is no doubt that HEIC will soon be used in the modern IP CCTV
cameras.

The small detail crop. Please note the reasonably sharp numbers 2 and 1 on the right hand side.

The small detail crop. Please note the reasonably sharp numbers 2 and 1 on the right hand side. 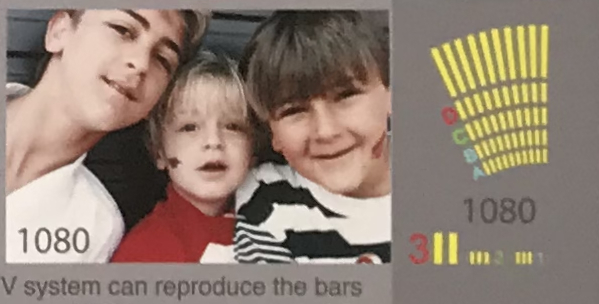 The small detail crop. Please note the numbers 2 and 1 on the right hand side, although blurrier
than the TIFF image, appear slightly sharper than the JPEG format.